Anyone that follows us on Instagram knows that Brom was in the hospital yesterday. Let me share a bit more about what happend and share some valuable information with you  at the same time.

For supper I snipped some fresh oregano from my garden, made some yummy pasta sauce and we sat down to enjoy supper after a fun and busy day.

We’d only taken about three bites when Brom began to choke. At first he was coughing, so we waited. But then his noises changed. His colour changed. Then my heart rate rose as I waited for Ryan to step in and rescue him. Only he didn’t. I breathed. In. Out. My pulse rose. Brom was red, purple, and turning blue.

I may have screamed at Ryan. I may not. Either way I jumped up, grabbed Brom, flipped him over my arm (good thing he’s still small!) and hit his bare back several times with the heel of my hand. I think the third blow dislodged whatever was blocking his airway. He breathed. He cried. he puked. We danced in joy!

Unfortunately a quick look in his mouth showed things weren’t as good as we hoped. He was complaining about something pokey in his mouth and when I looked, I could see a long, woody sprig of oregano lodged at the back of his throat. I started to try a finger sweep, but stopped. It seemed ridiculous to put my massive finger in his tiny mouth and hope to remove a thin twig.

Instead, we called 911. Brom continued to retch, and vomitted again. I paced.

When the ambulance finally arrived things had calmed down a bit. But Brom was still complaining about the pokey thing in his mouth. But when the Paramedic looked in his mouth, he couldn’t see anything. At this point, there was a lot of talking about what we should do  next, we decided to go to the hospital just to be safe. Honestly, I was terrified of putting Brom to bed with something still in his throat.

After we’d been at the first hospital for several hours and Brom wasn’t getting better, they decided to transfer us to the children’s hospital. They made the calls, and signed the paperwork. And then Brom retched one last time, and felt better. He perked up and became his usual giggly, silly self! 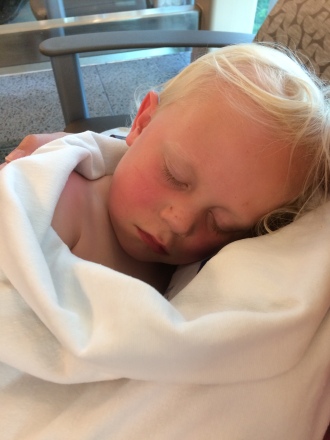 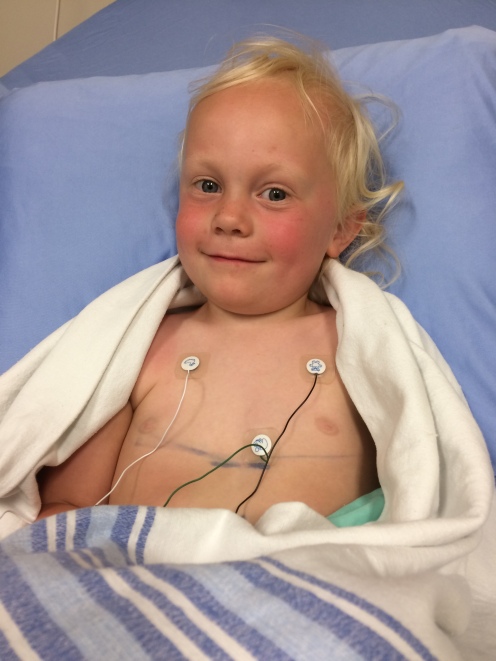 I suddenly felt so much more confident and calm. I was sure he’d be okay.

We stayed the night on an ER stretcher, in a freezing cold room, with too few blankets, and no pillows (though a lovely undergrad nurse did bring me a folded blanket to use as a pillow). By morning Brom was more than ready to go home! Luckily the ENT doctor agreed that sending us home was the best course of action.

Children choke. They actually choke pretty often – at least mine do, though only one other time was even closely this severe. It is vital that parents and caregivers know how to clear a bloked airway and how to perform CPR if needed. But also vitally important to know when to jump into action.

When a person’s airway is obstructed, they still make sounds. But depending on how much of the airway is blocked determines how much sound a person makes.

Ryan sat and waited for Brom to stop coughing – which you’re supposed to do! Coughing is the most effective way to clear an airway, especially for young, healthy lungs! But a person that’s coughing can quickly turn into a person that’s not coughing. The shift is marked by a change in noises and intensity.

A person that’s choking, but able to cough, typically has loud sounds coming from them, their body movements will be fairly minimal, they’ll be able to respond with either words or head movements (nod/head shake). They’re uncomfortable, but not panicked.

Once the person moves from effective coughing into the zone where they need help, their body movements become more wild, exaggerated, sometimes less coordinated. They may still make noises, but they will not have an effective cough, more a squeak (likely noticed on the inhale vs exhale). If you ask them a question like, “Are you choking?” or “Do you need help?” They likely won’t be able to answer, not even with a nod, this is especially true of younger children!

A third sign that indicates a person requires assistance is their colour. When choking, colour change is common. Coughing often turns a person’s face red. The deeper the colour, the more effort the person is putting into breathing. But the colour of the person’s cheeks doesn’t matter, instead the important colour is their lips and the skin right around their lips. This is the first place you’ll notice a blue tinge if a person isn’t getting  enough oxygen.

Unfortunately, the only way you really learn the difference is through experience. I’m hoping to help others understand that difference easier. The good news is that the difference between the time the shift in level of need happens and when a person reacts is often not long, but the sooner a person reacts, the better.