Agatha’s been having such a tough time lately. It’s been so difficult figuring out what’s been going on and how to fix it. Over the past few days Ryan and I’ve both spent more time with her, talking to her and playing with her. It looked like things were going great, then bedtime hit. We’d already finished reading their bedtime story. It was late. I wanted to get on with tidying so I could get some work done on a sculpture. I was done.

She wanted another chapter of our book.

I said no. She was disappointed.

I didn’t see her disappointment. What I saw was a child who wouldn’t think of others (Cordelia was asleep and would miss the story). I saw a child who just wouldn’t let up. Always demanding more time, more attention. I snapped. I lectured her.

I forgot our number one parenting tool. Always assume your child has positive intent.

I forgot that number one parenting ‘rule’ and I hurt Agatha deeply when I assumed she was being selfish. I was the one being selfish, I projected that onto her. 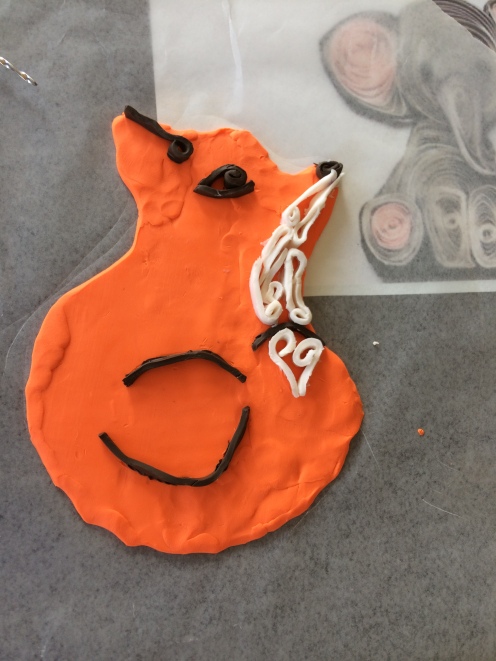 Making a polymer clay fox together

Reading to her Brother

Luckily, mid lecture I realized what I was doing. Got down on my knees. Apologized to her. And asked if I could start over more respectfully. She was hurt, but she agreed. Again she asked if I could read another chapter of the book. Again I said no. Again she was sad. This time instead of lecturing. I hugged her and said, “I know it’s an exciting book and I really want to know what happens next also. I know it’s difficult to wait, but Cordelia’s asleep and she’d be sad to miss the next part of the story. We’ll wait until tomorrow to read more.” We hugged and kissed, then I asked her if she’d forgive me for the way I treated her. I let her know she didn’t have to. But she did forgive me. And it was the greatest gift in the whole wide world!

The next day I needed to make it right with everyone else also. I called everyone to come to the table. I explained what happened, and pointed out that (both Ryan and I) I’ve been doing this in small ways for a few weeks now. I apologized to all of them because they were all impacted by my treatment of Agatha. I promised to do better. I explained our parenting ‘rule’ to them. And asked if they’d forgive me. They agreed.

This rule is simple, and the most effective parenting tool in my toolbox. Just believe your child is a good person and always has good intentions.

It doesn’t mean they won’t make mistakes. It doesn’t mean we’ll always be happy with things. It doesn’t mean everything is sunshine and roses. It just means they aren’t trying to be mean or spiteful. It means that the root behind their behaviour is goodness. Even if one child hits another, there is some positive desire at the root. Find that goodness and most problems can be solved and fixed without any stress or fighting. It’s both that simple, and that hard.

It isn’t always easy to see the goodness. Sometimes it takes a lot of work on our part to sit there and talk to our children and actually understand them. But the pay off in the end is so worth it!