The weather here’s wild. The wind’s blowing all over the place. I swear I thought Mary Poppins was going to show up any minute! When the wind wasn’t howling, the rain was drip, drip, dripping. I didn’t feel like dealing with sand today, let alone mud. So the poor kiddos were stuck in the house.

Since we couldn’t go outside today, we spent most of the day playing temple run and Magic Kingdoms, watching shows and playing with Viva Video.

Poor kiddos, by the end of the day they were pleading with me to let them outside! It isn’t often we say no, but today I really wasn’t comfortable with them outside the protection of our 4 walls (I’ve mentioned that we live in a new development, today aluminum and other construction debris was flying all over).

So what’s Magic Kingdoms you ask? It’s the new app we’ve recently added to our iPad, and it’s so pretty!

The Magic Kingdom’s been cursed, the rides are gone, the park is dark, but Merlin’s here to help.

Beginning with Mickey, you send characters on quests. When you complete a quest, the character raises his or her hand for a high-five and you get magic, wishes, and special items that’s needed to upgrade your park, or to get new characters.

The more quests you complete, the faster you break the curse over new areas of the park, but beware Maleficent doesn’t like it when you do that! (So far she’s only popped onto the screen and said, ‘don’t do that’ in one way or another. There hasn’t actually been a showdown or anything.)

The best part for our family is the music and fireworks. It feels magical! 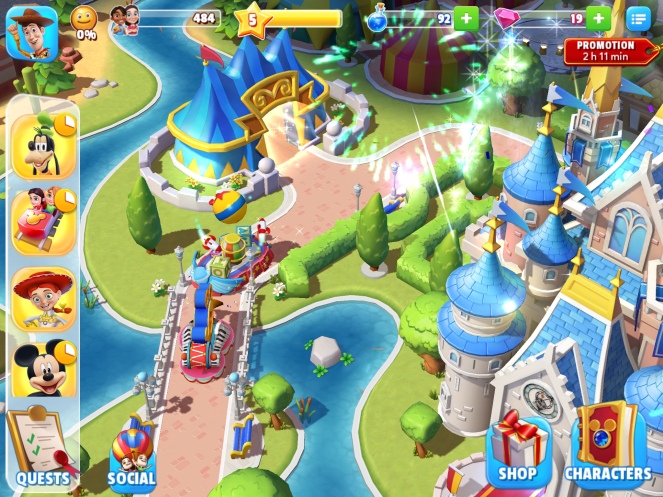 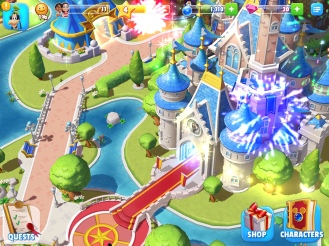 Our main complaint is there isn’t really a lot to do beyond the first couple levels. It takes a while to get more than a couple characters, and the quests that’ll give you the items you need to advance take a long time. This is great for Ryan and I since we seldom have more than a minute or two to play a game like this, but for 4 children stuck in the house all day, it doesn’t hold their attention for long. You can only tap Mickey’s House so many times before the repetition wears thin.

The over all story and intro felt very much like Sorcerers of the Magic Kingdom, a fun interactive card game guests can play at the Magic Kingdom. However, so far (I’m level 6) the story is where the similarities end. I’d say it’s more like Disney’s version of FarmVille. It’s not bad. Our children prefer games that require skill, or at the very least have outcomes that change. My park has attractions in different locations than my daughters’, but we have the same attractions because the quests given seem to be the same no matter who’s playing.

In short, we want to love this game, but it fell a little flat.

Viva Video, however, will entertain us for hours! Click here to see the first video we made with the app, it’s a kitty video, because that’s what youtube’s for 😉